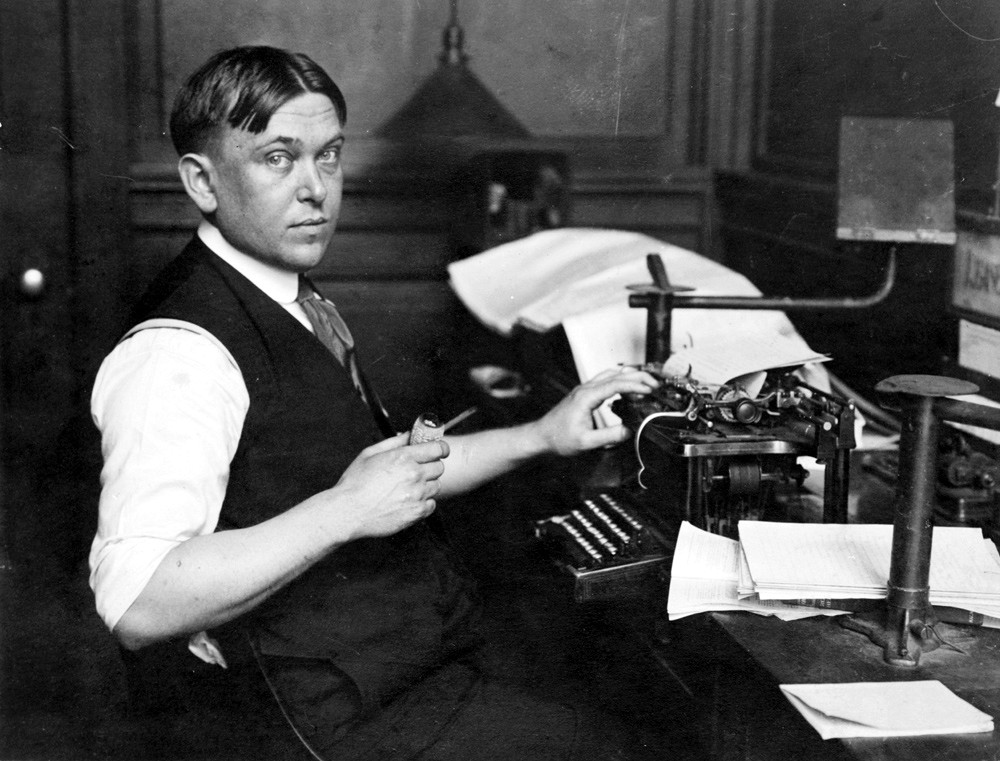 Our hometown of Baltimore gave rise to one of the most skeptical minds in the annals of journalism. H. L. Menken made a career as a professional skeptic who could spin a yarn. So it’s with a skeptics eye that we should approach the idea that fake news is causing irreparable damage to our country. With the backdrop of town that inspired Mencken’s storied skepticism, consider the life of another American icon, whose name will be revealed shortly.

Born in Hungary in 1847, this individual immigrated to America in 1864 to fight as a mercenary in our civil war for $200. Following the war, he moved to New York City, where he quickly found himself penniless and homeless. He spoke 3 languages, but none of them was English. With no better option, he became a “hobo” of sorts, living/travelling around the country in boxcars before eventually landing in St. Louis. He had trouble holding jobs, feeling manual labor was beneath him and he was “too temperamental to take orders”.

Eventually, he renounced his Hungarian citizenship and became a naturalized citizen on the United States. He committed to learning English and trained as a lawyer. He passed the bar. But his broken English undermined his credibility and his law career foundered. He briefly help public office. But, his political career went south when he shot a political adversary on the legislative floor. Mind you, this all happened before his 23rd birthday.

He took a job with a German language newspaper and toiled in relative anonymity for a number of years. But he was a hustler and he started climbing the ladder. He married the daughter of former slave owners who shared a bloodline with Jefferson Davis, the former president of the Confederacy.

Leveraging his newfound wealth, he bought and merged two smaller newspapers to create the St. Louis Dispatch in 1879. After selling the Dispatch in 1883, he moved to NY and bought the failing New York World newspaper. Having studied the newspaper business, he started implementing his own ideas. He grew the New York World circulation from a modest 15,000 to 600,000 readers. In modern terms, this would be a circulation 300X larger than the current New York Times.

How did he grow the paper so substantially? Partially with “fake news”. He’s widely co-credited with bringing yellow journalism mainstream. In fact, the New York World’s causal relationship with accuracy is partially credited with causing the Spanish American war. Why a war? Because war is great for the circulation.

With the war drawing new readers, the New York World raised the price it charged its newspaper hawkers for papers. The hawkers were a force made up almost exclusively of child labor. Of course when the war ended and circulation receded, the children expected the price of the newspapers to return to pre-war levels. They didn’t and the children went on strike. He tried to break the strike by hiring adults. But, the adults sided with the child labor force over the New York World.

So what would H.L. Menken think of this individual? Would he wish to silence his voice in the name of journalist honesty? Actually we need not guess Mencken’s opinion of Joseph Pulitzer. Yes, the same individual synonymous with excellence in journalism. Mencken wrote that Pulitzer is, erratic, cruel and prone to “curious streaks of cowardice”. But he also describes “the extravagances of the comedian never obscure the fact that the workings of a truly brilliant mind were hidden in them—that Pulitzer, at his worst, was still a fellow of gigantic force and originality, and of very real dignity.”

Despite the shooting, the child labor, the advent of yellow journalism—Pulitzer was an iconic citizen of these United States. He was an extraordinary journalist who is often credited with defining modern investigative journalism. He was an ardent populist who fought for the little guy from the ivory tower his wealth provided him. His papers trained their wrath on private companies and government corruption with dignity, ferocity and zeal. His newspapers introduced comics, while offering a level of artistry that few today would recognize.

Today, the rifts in our nation are real. The media, however you define that, has done the country and itself few favors in getting to this point. But the truth is almost always nuanced, and it’s up to the individual to distinguish between opinion, fact and fiction. Fake news isn’t new. From yellow journalism to the Weekly World News (talking to you Batboy) to whatever Facebook is talking about banning, the fringes have always been, well, fringy. Because the thing is, people don’t want to be lied to when they’re expecting the truth. So people will read, they’ll learn and they’ll adapt.

But the ramifications of censoring “fake news” (free speech) even the incendiary or obviously false types produced by individuals we might not like, could wind cost us much more than a few fake news stories…starting with the Pulitzer Prize.