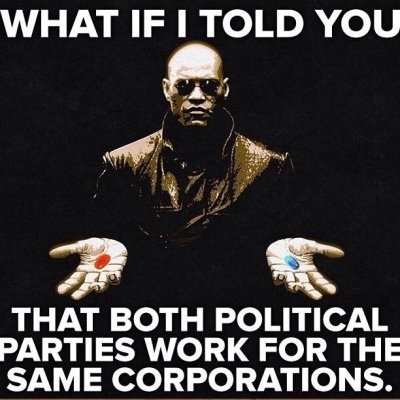 Two of the better known brands in America are suffering from an identity crisis. In the run-up to the quadrennial sales pageants known as the primaries, both the Republican and Democratic establishments are undergoing a period os soul searching. Too bad their consumers aren’t.

Oxymoronically called parties, these two institutions offer us a unique way to examine the strengths and limitations of a brand, especially one run by nothing but pathetic groupthink, pandering hypocrisy and a limitless supply of incompetence. Plus, it’s a nice way to take some well-deserved cheap shots at two groups of people responsible for wasting vast amounts of our lives with their self-aggrandizing myopic machinations.

Political parties and brands have much in common. They are both abstract forms of self-expression. They both thrive on vague promises of intrinsic fulfillment. And both feature an insatiable desire to consume every aspect of life they can lay their tentacles upon. Really, the main difference between a brand and political party is when a brand stops working, it gets thrown out. When a political party stops working, it gets rebranded and re-elected.

On the so-called American “right” the Republican establishment is anything but established. The party is being wooed by at least sixteen individuals (and we use the terms “sixteen” and individuals” lightly) with wildly divergent political philosophies.

From hot button issues like immigration, education, and international intervention to more abstract ideas like the free association of individuals, free speech to the free flow of capital, if it’s got two sides, you’ll find a republican on both of them.

On the Democratic side there are, for better or for worse, far fewer options. But the divergence is just as stark. The choice is whether the progressive future is the rooted in the path of the past. You’ve either got the dynastic option of the wife of a former president, or a progressive who is a Democrat…except that he’s a Socialist (a party affiliation peaked in America in the 1920’s). Nobody knows what the former is up to, and nobody seems to care about the latter.

What’s really amazing is that both the Republicans and Democrats are self-selected groups, in theory united by a common philosophy, a common brand. But both of them are all over the place. It would be like Apple trying to decide if they want to sell Apple products…or possibly Android products would make more sense.

Hey, it’s not as if the ideas the Dems and Reps are wresting with haven’t been thought out, tested and vetted over the course of what’s commonly referred to as history. Even if you think JFK invented politics and Reagan perfected it, that’s still more than enough time for both sides to have figured out what their brand should stand for.

Ideally a political party gets together and establishes a platform that will create a unified vision of what their brand stands for. Of course, this never happens. In reality, the political party’s brand is a free-floating feedback loop that’s continually evolving around the concepts of democracy and the public good.

Whoever gives them the most money gets to make the platform. Most of the time, the same people are giving to money to each side. They just want to let all the money come flowing in before they “find” their individual souls.

It’s been said that governing is prioritizing. Allocating limited assets. Which may be true. But at least for now, these brands are still gathering their assets.

So the next time you’re thinking how difficult it is to stay on brand, think about our leading political parties. They are two brands based on deeply held personal beliefs, and they can’t even agree about what they agree on.

Party’s over? Heck, the party’s just getting started.